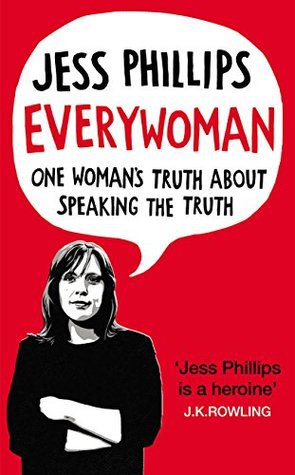 A lot of people scoff at the thought of going into politics. Even more so if you’re from a less wealthy background because it’s not what someone ‘like us’ does is it? Be prepared to completely change your mind and want to start a revolution of diversity and equality and it’s all thanks to Jess Phillips.

I picked this up after watching an interview with Jess online, I finally saw someone who I could identify with who works in our government. This book is much more than politics, this is about women, empowerment and just giving things a go! Previously, Jess worked for Women’s Aid, an incredibly important charity supporting women who need help most. Some of the stories were harrowing but show the fire behind Jess’s speeches in parliament, such as those about domestic violence.

From Mum guilt to just about getting through university Jess talks about anything and everything. That said, she also touches on some heartbreaking topics. There were many moments in this book that touched me but it was the parts talking about Jo Cox that really got me. Jo Cox was an MP in the UK, a rising star in the Labour Party, Jo was murdered for doing her job and being a compassionate human. Jess was a friend of Jo’s and I can’t imagine how hard it was going through such a horrific loss.

Not only is Jess a kick-ass MP for Labour, she’s a friend, a proud Feminist, a Mum, a Wife and, by the sounds of this book, the kind of person I’d want to have as a friend. This book fell into my hands when I needed it most. I was feeling like I was struggling as a woman, I was feeling a little beaten down by the world. Then I realised I can do this because there is so much to do! It really gave me the pick me up I needed.

I’ve recommended this to almost every one of my friends because it’s the kind of book that can and will start a revolution. Of course, I gave this 5 stars, I could not stop listening to the audiobook at every opportunity I had. I’m pretty sure I’ll not only be buying this as a gift for a few people but I’ll also be listening again very soon!