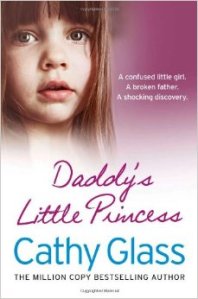 When 7 year old Beth was placed in Cathy Glass’ care the situation was considered normal. A young girl with nowhere to stay after he father is taken ill is almost text book in the life of a foster carer and despite Beth understandingly being upset to be away from her father there is nothing out of the ordinary. While Beth adjusts to family life and Cathy deals with some struggles of her own things take a drastic turn. Cathy soon realises that little Beth has not be having the normal life of a little girl. As Beth’s behaviour begins to show signs of trouble from home, Cathy is faced with concerns from Beth’s school teacher as well as her own feelings that something isn’t right. From that point on Cathy has to fight to make herself heard and hopefully save Beth.

In this book Cathy broaches the subject of Emotional Incest, something which you probably haven’t heard of before. Let me point out there is nothing sexual in this, although it is known to develop into a sexual relationship unfortunately. As with other novels Cathy has been able to present this in a non judgemental way, something she is incredibly good at. It also gives a lot of information, the information she is given as time goes on in regards to the situation. I find it incredibly sad and go as far as saying that if people weren’t as judgemental maybe Beth’s father may not have felt the need to hide them both away as a single father. That said, I did at times get shivers down my spine because ultimately it is a form of abuse even if it isn’t physical.

Trouble also comes in the form of Beth’s relationship with her fathers girlfriend, who also shares her concerns with Cathy about the way Beth and her father relate to each other. Despite Beth’s obvious jealousy Marianne really does try which is nice, even in the face of such allegations she does not walk away and instead if a support figure.What frustrated me throughout was that he social worker didn’t seem to want to listen to Cathy’s concerns nor did she regard Marianne’s observations or Beth’s school teacher either. I wanted to scream at them listen! listen to her! It was so frustrating to watch it drag on and Cathy appearing to blame herself for not taking things seriously even though at this time I believe foster carers received little or no training.

One of my favourite things about Cathy’s novels is that she lets us know as much as she can about how the child is getting on. It gives the reader peace of mind about these poor children who go through so much, it’s impossible not to care about these children, you become attached to them and I don’t know how Cathy does it time and time again. She’s selfless and so are her family even when facing something that cause catastrophic results. Even in this novel when the children are so small themselves and having their own troubles they still find time to play with the new children and make them feel included and special.

I want to give Daddy’s Little Princess four stars ****. Once again Cathy has tackled an incredibly sensitive subject and given thousands the chance to see a glimmer of understanding and I hope that this will invoke change. Although at times it is difficult to read at the same time it can be a pleasure to see Beth grow into the little girl that she is supposed to be. It’s also important that Cathy’s reactions also match the readers, it makes her more human, especially as she so often shares things she felt she had done wrong or could have changed. As with her previous book Will you love me? we have another best seller in front of us and she rightfully deserves it.