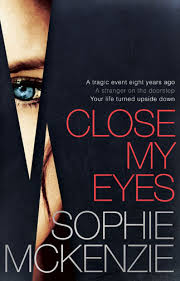 Your daughter has been dead for seven years,

As you dare to believe them things start not quite adding up.

Addicted yet? You should be. I almost put this book back when choosing between three books in my local Tesco on an impulse buy. Although I read this after The Light Between Oceans, I am so glad I bought it!

Meet Gen Loxley, on the outside a woman who could not wish for anything more in life. A loving husband, financial stability and a writing career of her own. Behind closed doors however Gen has a deep hole in her heart in the form of her stillborn daughter, Beth. Gen has never really recovered and is currently ‘existing’ rather than living. When a stranger arrives at her door and tells her that Beth was born alive she is shocked to her very core. I must use this first point in the review to applaud Ms McKenzie the character of Gen is so real. McKenzie has not hidden behind the stereotypical grief stricken mother, she has made Gen someone you could actually know. We know that she has suffered the loss of a child which many of us could never imagine, however after this gradually in the 7 years after Beth’s death she lives. Although Gen’s pain radiates through the novel, her anguish at all the failed IVF attempts since she does not appear to mope, although she has never truly bounced back to how she was before. The best thing is that as a reader you question the accusations with Gen, you create your own arguments. I became absorbed in this novel reading it in just over 24 hours and it was constantly on my mind. You know to some extent, just as Gen does, that the whole thing is completely crazy but I think that it is a true testament to Ms McKenzie’s talent that you don’t really think of and hole you could pick in it until well after you have finished reading.

I will admit that later in the book I grew impatient. After a key point to the plot I was hungry for more, meaning I skimmed around two chapters before finding something I could sink my teeth into again. I don’t believe this is a fault of Ms McKenzie, instead I find that it is me who insufferably impatient with a good plot. That said without the whole content of the two chapters I could still follow the plot almost perfectly. I was also pleasantly surprised that you are allowed to have your own opinions of the characters. One too many times I have been confronted with authors who try and sway your view a little too much but Close My Eyes lets you see all angles. Is Gen crazy? Is Art involved or just a caring husband? Endless questions that kept me hooked.

As for the ending McKenzie has managed to produce one of those rare moments where a reader will actually gasp. I was glad I was alone when reading as I did gasp out loud and I believe I actually said ‘no!’ and as for the very end? I had shivers down my spine and utter disbelief the only thing crossing my mind? This woman is a total genius for coming up with the plot. There are other parts of this novel I could rave about but I would give it away for you!

I give this 5 stars ***** (something I don’t normally do), this novel is incredible and I would recommend it to anyone. Ok so the plot may seem a bit far fetched when you read the blurb but trust me and try it because you become so absorbed that anything could be possible.

Published by Simon and Schuster.